The owner of Ellerman House, Paul Harris, decided to create a unique space to showcase South African wines, the brief he gave to the architectural and design team was to come up with an original concept for a wine gallery, rather than just a tasting room or cellar – something that had never been seen or done before anywhere in the world. The end result is the collaborative genius of a dynamic and diverse team of highly creative South Africans, led by architect Michael Dennett, sculptor Angus Taylor, blacksmith and sculptor Conrad Hicks, industrial designer Brian Steinhobel, and designers Trevyn and Julian McGowan of Southern Guild and Source.

‘The wine gallery is much more than a functional space – it’s a work of art,’ comments Harris. Here, tasting the finest wines from the Cape’s local vineyards or sipping a 20-year old brandy is elevated to an experience that touches all the senses. Integrating contemporary architectural design solutions with breathtaking sculpture and cutting-edge design, the wine gallery invites you on an interactive journey into the wonderful world of wine. We also have a brandy tasting lounge, red and white wine maturation cellars for vintage and rare bottles, a champagne cellar, stocking rare and special vintages of Dom Perignon.

Architect Michael Dennett designed a structure that complements and honours the existing buildings of Ellerman House, merging old and new, past and future. He describes the wine gallery as a series of architectural spaces that appear to be carved out of solid rock. Inspiration was drawn from the spiralling helix shape of DNA strands, reflected in the design of Brian Steinhobel’s wine rack and Conrad Hicks’s staircase; and the Fibonacci or golden spiral, the oldest form of perfect proportion and symmetry used by the ancient Greeks, used in the design of the granite and in-laid copper floors. The three-storey structure, which includes the wine gallery and villa above it, explores the dialogue between carved and constructed spaces, and the blurring of boundaries between the natural and the man-made, creating seamless transitions on all levels between indoor and outdoor spaces. Elements such as flowing water, a vertical indigenous garden and weathered granite boulders are means of measuring time, movement and the seasons. Many of the building materials have been left to weather naturally. Taking a minimal intervention approach now means that the finishes will reveal their innate, inherent beauty over time – in a similar way that a good wine improves with age. Materials derived from the earth – wood, glass, granite, copper – contrast with hi-tech carbon fibre (derived from the earth’s most basic element, carbon) and silky smooth moulded silicone, while grounding and anchoring the whole.

Brian Steinhobel is recognised globally as one of the world’s most talented, prolific industrial designers with a career spanning three decades. Over the years, he has designed everything from parts for Formula One racing cars and airplanes to sensually shaped chairs and ice buckets suggestive of the female form. In designing the focal point of the wine gallery, an enormous three-dimensional wine rack holding 1500 bottles and bearing over two tons of weight, Steinhobel was inspired by a humble corkscrew. The 3.2m high, 6m long structure is a literal translation of a corkscrew or helix shape. ‘The shape was also informed by the free form curves and organic growth of vines. The human scale of the wine rack enables you to engage with it, by walking through it and enjoying the sense of being inside a vineyard, with the vines arching over above your head,’ says Steinhobel. ‘I like to think of this as an experiential, functional piece of art – beautiful to look at, understandable, timeless and inspiring, each curve holding something of value – a bottle of wine.’ Steinhobel chose to mould the wine rack out of carbon fibre for its connection to the earth and the notion of terroir with its significance in giving wine a unique identity and sense of place. Designed to hold 1500 bottles, each nestled in a specially designed, protective polimer boot, the structure had to be installed in pieces. The end result is ‘light to the eye’, according to Steinhobel, rather than monolithic.

Angus Taylor, known in South Africa and abroad for his powerful, larger-than-life works of sculpture characterised by outstanding craftsmanship, initially became involved in the project to counter balance Steinhobel’s ultra-sleek wine rack. This thinking, balancing cutting-edge technology and materials with old, time-honoured forms of craft and natural materials, is intrinsic to the overall concept of the wine gallery. While South African wine is modern and embraces cutting-edge thinking and technology, the industry has a rich heritage that dates back 350 years. Successfully incorporating the history and pedigree of Cape wine into a contemporary space was key. Taylor’s role grew to include the design of many key elements with a sculptural quality, including the granite floors, a terroir wall made up of soil samples from 100 wine farms, a monolithic bar counter, the 13 stone steps that lead to the underground cellar, and the tasting counter in the Champagne cellar. ‘The execution of the designs is a celebration of age-old craft forms where the boundaries between craft and art become increasingly indistinct. Nothing that you see here could have been completed without the skill of exceptional craftsmen.’ 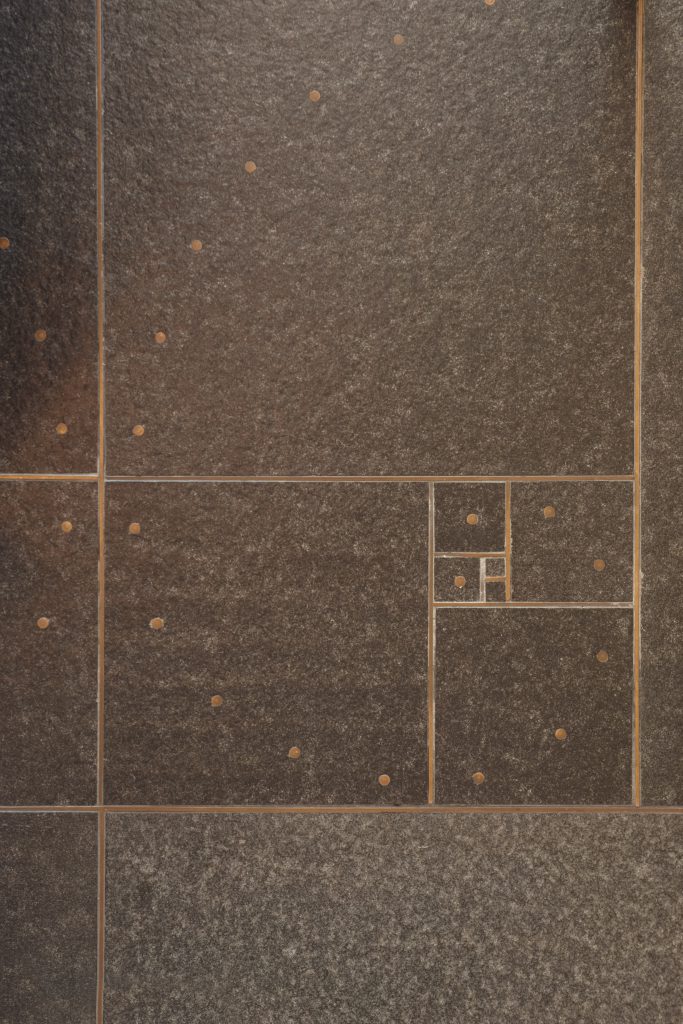 Taylor began with the floors, explaining that working from the base up is one of his trademarks. Architecturally speaking, the building was also designed from the inside out, and from the ground up. Although often monumental in scale, Taylor’s sculptures appear to sink into or rise from the ground. Echoing Steinhobel’s spiral design, Taylor used Fibonacci’s golden ratio theory – a sequence of ever-increasing scale that creates a random yet coherent pattern – in the design of the floors. ‘We used 20mm-thick South African granite that was flamed and then polished with up to twelve different brushes to retain its raw, irregular surface but with a refined, almost sensual texture. Between each of the stone blocks we laid in a 3mm copper strip, in reference to the richness of the earth’s minerality and the importance of soil and terroir. Once the floor was laid, small copper rods were laid into the stone to create a sequence of dots that recreates the spiral design,’ explains Taylor.

Angus Taylor has been working with rammed earth for a couple of years and felt that it was appropriate to incorporate an element of it here, to ground the space. On the advice of soil experts, soil samples from 100 locations were dug out from more than a metre below the earth’s surface to collect the ‘mother’ material, the middle and top soil, before being catalogued, packed and couriered to a central point. The completed work presents soil samples from 100 wine farms, each rammed earth creation contained in a copper frame engraved with the farm name and GPS co-ordinates of the soil sample hole. As the wall was assembled, it was like a giant, living puzzle that took on the shape of the winelands. ‘I do not know of any other ‘map’ that is actually made from the soil that it represents. Nowhere else can one see, touch and smell the foundation of the wine, the terroir,’ says Taylor.

A Monolith – The Bar

The main bar counter is an enormous, monolithic structure, built at Dionysus Design Works, Angus Taylor’s studios, first in steel rod and then in wood, to help him become familiar with its scale. Digital 3D specialist Alex Von Klitzing drew up the design in digital space. This gave Taylor the opportunity to alter the shape and proportions. The completed file was fed into a computerised diamond wire cutter with the capacity to cut segments of the bar from stone. The surface of the bar counter has been hand textured and polished. The simplicity of the bar is a foil for the mirrored wall behind it, made from exquisite hematite (iron ore) with an iron content of almost 70 percent. ‘I found it in Thabazimbi, which means mountain of steel,’ explains Taylor. ‘The stone extends over an enormous surface and progresses from rough to smooth, starting on one side just as I found it in the veld then gradually polished until it reaches the centre and merges into a charcoal mirror, behind which is a flat-screen TV.’

Throughout, wine and the winemaking process are used as references. Wood was used for its acoustic value, to soften and warm the hard, flat stone surfaces and in recognition of the vine. The back wall of the wine gallery is clad in an aromatic indigenous wood called Matumi, which is very dense and hard and sinks in water. Solid, untreated planks, 6-8cm thick, were used in their natural, raw state and stand in dramatic contrast to the beautifully crafted stainless steel spiral staircase and carbon-fibre corkscrew wine rack.

A separate space within the wine gallery is dedicated to the South African brandy industry, recognised as the third oldest brandy producing country in the world. South Africa has produced many world-class brandies over the years, many of them notable award winners. The main feature of the brandy tasting lounge is an installation of handblown glass decanters, each bottle suspended and filled with brandy that progressively becomes darker from start to finish using increasingly older spirits to fill each one, starting with one-year old and ending with a 25-year old vintage. The visual display gradually deepens in colour from very pale to dark hues of gold.

A special feature of the wine gallery is a Champagne cellar. A first in South Africa, the cellar is stocked exclusively with rare and special vintages of Dom Perignon. Attention to detail in this subterranean space extends to the huge piece of chalk, weighing two tons from the Champagne region in France. In terms of terroir, chalk is known as the ‘mother material’ of this celebrated region where the great champagnes of the world are produced.