Ellerman House received a special delivery recently that had guests and staff members excited beyond the usual merriment of evening cocktails and unbelievable sunsets. An extraordinary selection of artworks arrived at the front door to accompany the revered collection that already adorns the house and gallery walls. Here is a small selection of artworks, as highlighted by Ellerman House Art Curator, Margaret Gradwell. 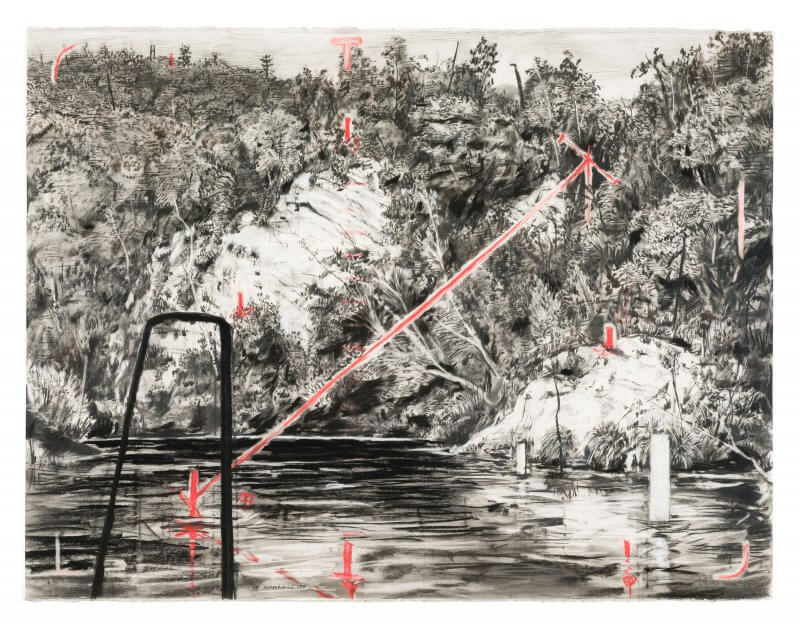 From the series Colonial Landscape

This museum-quality artwork has been exhibited at several USA national galleries from 1996 to 2003. Starting off at the Goodman Gallery in Johannesburg it travelled to Washington, New York, Chicago, Houston and Los Angeles, before being exhibited at the South African National Gallery in 2003.

Colonial Landscapes is inspired by a nineteenth century publication, Africa and its Explorers (c.1907), a two-volume account of expeditions made by Livingstone, Burton and others. Deep Pool is a large polished drawing extracted from the original detailed engravings of exotic Africa’s natural splendour as depicted by the explorers that recounted the colonial past.

These drawing are very different to the earlier roughed-up landscapes of Johannesburg and dystopic city edges that served as backdrops for Kentridge’s stop frame animation films.

Kentridge recounts: [It was a] pleasure of working with the ‘code’ of engraved marks and playing with the mediations from raw veld to the sketchbook of the traveller, back to London to the professional engraving shop where the view would be re-dramatised, and engraved, to a hundred years on, looking at these now yellow pages. The new red marks are both beacons erected in the landscape and the surveyor’s theodolite markings of the image in the viewfinder.

The viewer shares scrutinising the land, through a viewfinder, but division and exploitation of the idyllic landscape is made evident by the cadmium red markings that “bruise” the landscape. Objects such as  a megaphone, distant goal posts and a diving board are motifs that often reoccur in the work of William Kentridge. 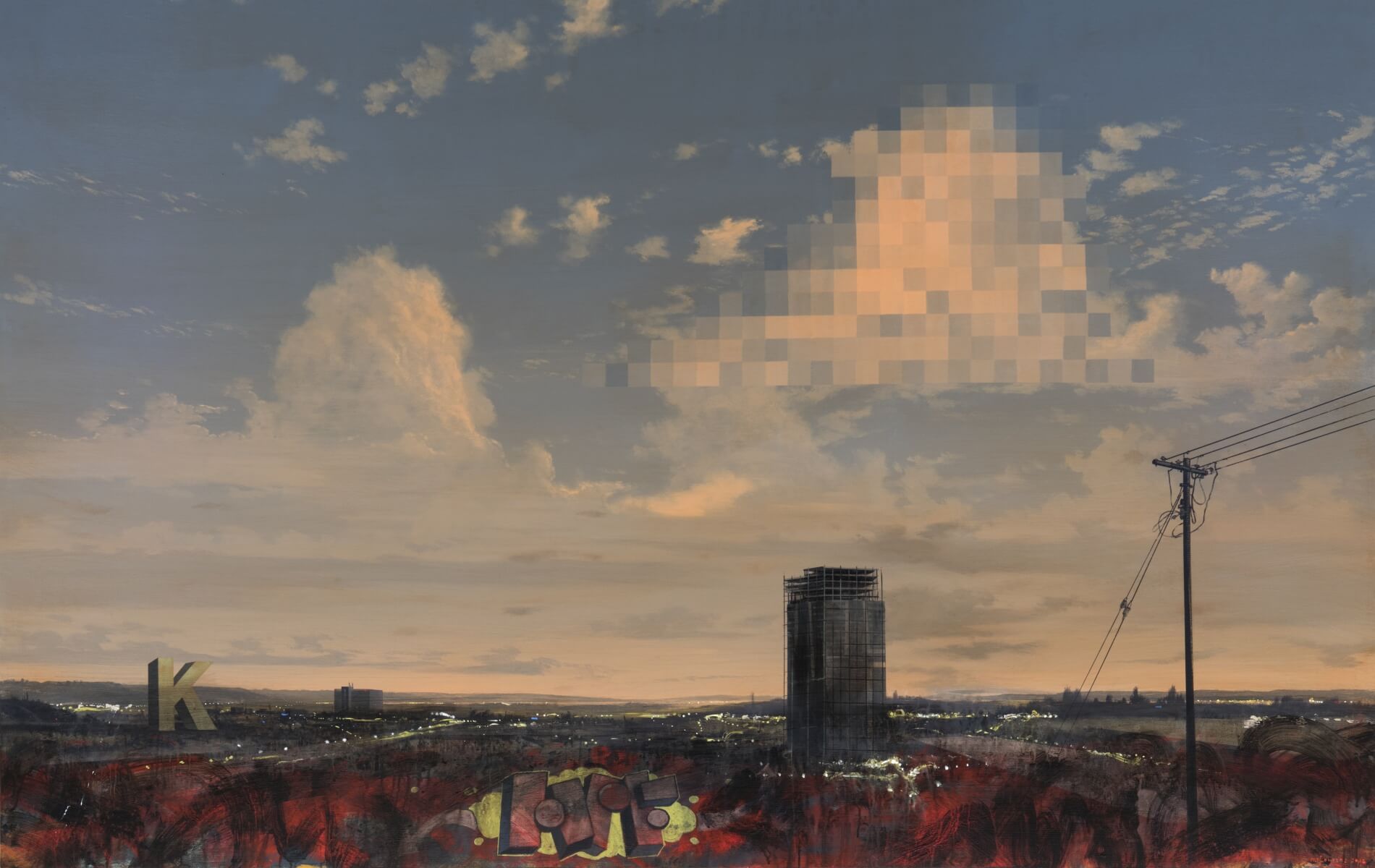 Fall of Apathy ii was a major work of the exhibition by MJ Lourens entitled Views on Entropy. In this work,Fall of Apathy ii, Lourens suggests that there is a lack of concern for the land due to industrialisation, yet the beautiful variables of sky, dusk, clouds and buildings leaves the viewer questioning the intention of the work.

Entropy is a lack of order or predictability or a gradual decline into disorder. Lourens attempts to capture this invisible entity by faithfully recording and meticulously depicting this unfortunate state of affairs. Lourens is fundamentally concerned with the relationship between land, sky, light and subject. There is a play between highly realised forms and spaces of abstraction and play. The pixel and pixilation appears as recurring motifs, as he considers the ways in which digital media affects the way we view things. The pixel image is inaccessible and suggests a fractured image that disrupts the viewing process. 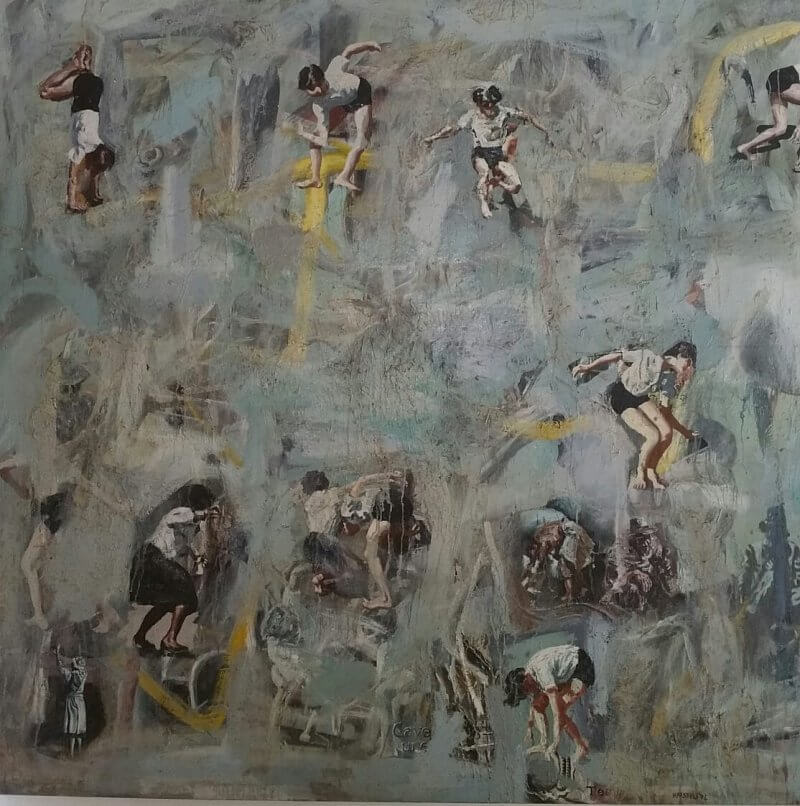 Anton Karstel’s large oil painting ‘Liggaamsopvoeding vir meisies’ was painted in 1994. Karstel belongs to a generation of artists, now mostly in their mid-forties, who emerged during their formative years from turbulent times in South Africa. Social upheaval and transformation which led to democracy in 1994, coincided with major developments in local art production that broke with traditional and formal artistic heritage. The emergence of Neo-Expressionist painting provided the perfect tools for Karstel to express himself with absolute freedom.

Karstel takes the subject matter of his paintings chiefly from photographs that he reworks through masterful manipulation of paint. ‘Liggaamsopvoeding vir Meisies’ (Physical education for girls) deals with South African, and specifically Afrikaner heritage and history. The found images of girls doing gymnastics, are from journals read by practitioners of physical education from the 1930s onwards. Although these images of the human body are beautiful, they are imbued with layers of meaning that tease out new relationships and heighten drama.  Karstel is fascinated by the implication that physical education for woman was positioned by academia as the most important bearer of the health of a nation. 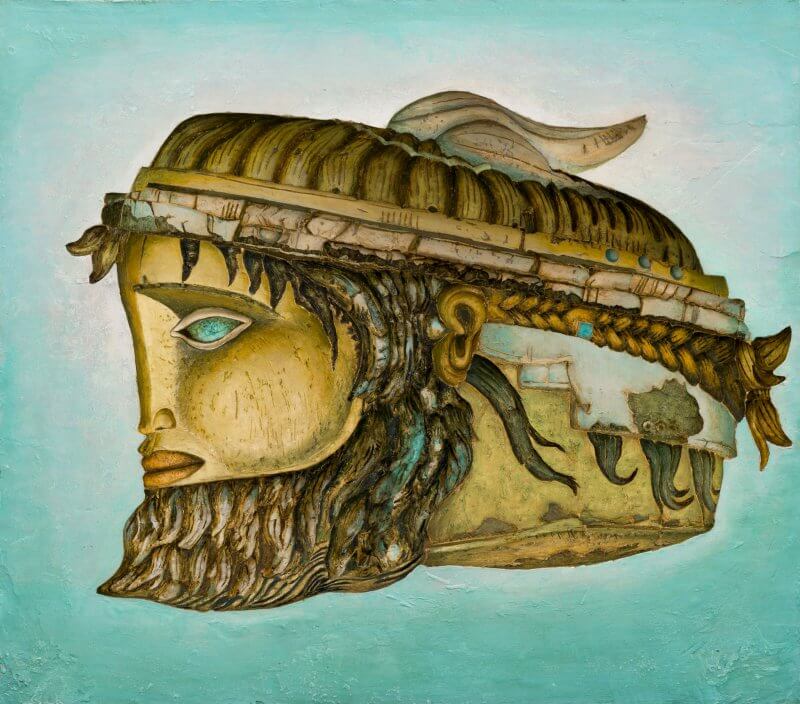 Alexis Preller’s Poseidon (Greek god of the sea) relates to a series of intaglios (recessed images) of his late-career. They were produced after an inspiration trip to Greece and Turkey, and and planned as a surprise factor for Preller’s 1969 exhibition at the Henry Lidchi Gallery in Johannesburg. Writing to a friend in Greece Preller explains the technique he pioneered:

“Since February I have been working on an idea that goes beyond the usual idea of a painting on canvas. It involves part sculpture and part painting. I make a model in clay, then take a fibre-glass casting, and then work on that with paint. This is in order for the light to build out the form. It also has the effect of making the figures [seem to] move and change expression. My agent in Johannesburg is very excited. We both think it is something quite new in painting.”

The inspiration for Preller’s Poseidon was the head of the bronze Poseidon of Artemision, a Greek sculpture that was recovered from the sea, and is the highlight of the collections in the national Archaeological Museum of Athens.

Preller’s Poseidon floats in a glinting, aquamarine sea. The effect of painting on the negative moulded surface creates a deceptive effect. At first sight, the work appears to be conventional painting on a two-dimensional surface. It is only when one approaches the work that the concavity becomes apparent.

It was during this period that Preller began to experience troubling sensations in his right eye, which was recognised as the symptoms of a detached retina. Preller underwent an entirely successful operation but spending 4 weeks flat on his back, he had the opportunity to contemplate his new innovative paintings.

Among Preller’s  followers, there was some discussion about his apparent aim of reinterpreting Greek concepts. He answer was:

“I used what I had seen in Greek art to get back to this idea of a single figure. So that all of the intaglios, although they are Greek, are not necessarily Greek in mind at all. It is just to get down to a very simple figuration, whether it be a figure or a head.”

Preller only commented on the surface narrative and was unconcerned about the metaphorical connotations that could be read into his work.

In 1972 a very successful, comprehensive exhibition of Preller’s work was held at the Pretoria Art Museum. In 1973 he was the star artist of the Sao Paulo Biennial where he was represented by 5 intaglios and six oils. After this his health began deteriorating and after a final exhibition at Goodman Gallery in 1975 he passed away on 13 December 1975 at the age of 61.